Kov Ata Undergroud lake –  you descend from the cave entrance in the side of the hill into a gloom illuminated only by the orange glow of the electric lamps flanking the steep concrete staircase. 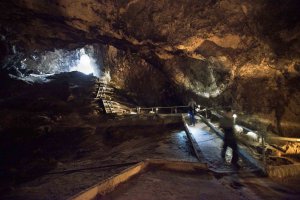 The air is clammy. The sound of birds, keeping close to the light at the cave entrance, gives way to that of bathers below. There are some ramshackle changing rooms in the depths of the cave. Here too, bizarrely, is a subterranean coffee stall. Just below, at a depth of 55m from the cave entrance, is the underground lake. With a length of 70m, and a depth of 10m or more, the lake is known for the warm temperature of its water, a year-round 37°С or so, giving a swim here a warm-bath feel.

The water also has a high mineral content, prompting both claims about the health-giving properties of a swim and warnings that bathers should not stay in the water for too long. But the sulphurous smell from the lake, coupled with the half- sensed presence of bats overhead, also gives the place something of an underworld quality. The climb back towards the growing patch of light at the cave entrance can feel like the ascent towards salvation. Or at least towards a world less pungent. 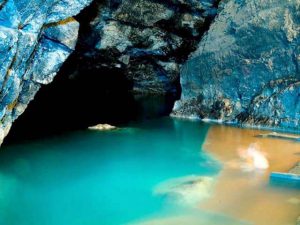 Several legends surround the place. One of these is all about a peculiar cow, which every day for a month joined a shepherd’s herd all day, before leaving at nightfall. The shepherd followed the cow, to claim the shepherding fee due to him from its owner. The cow arrived at the underground lake, where an old man was sitting. The man gave the shepherd a small bag as a shepherding fee. The shepherd left the cave, and opened the bag, to find it was full of fig leaves. He threw them away in disgust, but kept the bag as a gift for his wife. When he gave her the bag, another fig leaf fell out, and the shepherd and his wife noticed that it was made of gold. The shepherd therefore hastened back to the cave, to pick up the other leaves he had thrown away, presuming them to be golden too. When he returned, a garden of fig trees had sprung up at the mouth of the cave. Of the old man and his cow there was, however, no sign. This, the tale concludes, explains the origin of the name Kow Ata, as a contraction of the Turkmen phrase meaning ‘The Old Man in the Cave’. Other sources suggest that the name just means ‘Father of Caves’.