Akcha-kala caravanserai (second half of the XI c.) situated on the ancient road from Merv to Amul, approximately 8 km to the north-east of Merv.

This lonely station is remarkable for its dimensions (150×80 m) as well as for architecture. Its blank outer walls of pakhsa are shaped with goffers of unusual form: two semicircular quarter pillars are divided by flat blade with a joint slit in the middle. At the corners of outer walls there are diagonally located quadrate towers. On the main façade there is a massive peshtak with a lanced niche. The ceilings of the rooms were domed.

Akcha-kala station had been not mentioned in the travel books of the IX-X cc. since it was shaped as a large caravanserai just in the XI c. 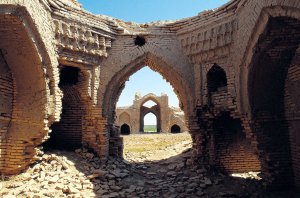 Akcha-kala brightly illustrates the local planning type of this structure usual for the medieval East. Such lay-out is found neither in the Near Eastern architecture nor in Maverannakhr. But it was enough wide-spread in Khorasan where the most characteristic inn type for this territory was formed by the end of the XI c. The lay out scheme of these rectangular or square but always symmetrical structures includes the courtyard along its perimeter surrounded with the rooms for guests, storehouses, open sheds for pack animals and forage. Sometimes a separate service courtyard was made for animals and forage as in caravanserai of Akcha-kala. Now Akcha-kala is perhaps the only survived example of caravanserais with two-part lay-out the analogy of which give just the caravanserais of Mansaf situated on the way from Merv to Amul (at present it does not exist).