Parau-Bibi – Settlement of Ferava. This started out as a fortress, lying between Khorasan and Dekhistan, but was enlarged somewhat under the Seljuks, when it became a notable Silk Route staging post, covering an area of around 35ha. 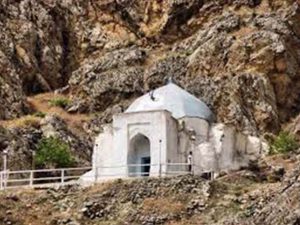 A square-based but now roofless mausoleum, known as Parau Ata, is the main structure standing at the town site. But the building of most interest lies on the steep hillside to the south. This is the Mausoleum of Parau Bibi, which dates perhaps to the 11th century. It is now one of the most important centres of shrine pilgrimage in Turkmenistan. A legend surrounding the place, similar to the tales governing several other mountain shrines across Turkmenistan, is that Parau Bibi was a maiden of great virtue. When faced with the prospect of capture by an approaching enemy raiding party, Parau Bibi prayed that the mountainside should open up and take her, in order to preserve her honour. It did so, and the local people, so the story runs, built the mausoleum on that very spot. 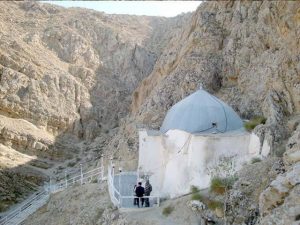 At the base of the hillside stands a large complex comprising a guesthouse, an area for meals and a large car park. There is also a war memorial here, topped by an artillery piece. A flight of concrete steps leads up to the whitewashed mausoleum. On the way up, pilgrims walk three times anticlockwise around various natural features, including a clump of trees and a large rock, considered to be sacred places associated with the legend of Parau Bibi. The mausoleum contains many votive offerings, including model cribs and plastic rattles. In one corner of the mausoleum is a small cave: it is believed that this is the spot at which Parau Bibi entered the mountainside. Immediately to the left of the mausoleum, steps lead down to a little side room. This contains a large collection of hair-related objects, including mirrors, combs and hair-grips. Female pilgrims often brush their hair in this chamber, since it is believed that Parau Bibi herself often visits this place to comb hers.