Nisa Fortress – The site of Old Nisa covers around 14ha, an irregular pentagon in plan, standing on a natural hill. Parthian inscriptions found during the course of excavations give the name of the fortress as Mithradatkirt. 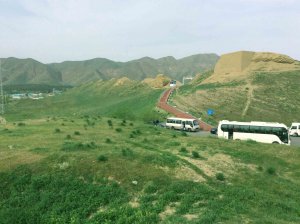 Some researchers have accordingly linked the construction of the site to the Parthian ruler Mithradates I. Others suggest that it was built earlier, possibly in the late 3rd century ВС, and later renamed in honour of Mithradates. Archaeologists continue to debate the function of the complex. It has been described as either a royal residence or a religious complex. Or possibly both. From the viewing platform, a concrete path leads across the site to the main complex of excavated buildings. Large depressions to your right probably mark the sites of water reservoirs. Continuing (currently Italian-led) excavations, some rather confusing conservation work and a reconstruction programme which has added a small museum in the heart of the excavated site all make it less than straightforward to get to grips with the plan of rooms and corridors, but there are some interesting structures to see here.

In the southwestern corner of the main complex is a round hall, some 17m in diameter, its walls standing to a height of 4m or so. A row of statue-filled niches is believed to have run along the upper wall of this hall. Northwest of here lies the so-called tower-like building, the scene of recent conservation work which has controversially included the addition of a two-roomed museum, albeit using mud-brick construction and preserving the traces of plasterwork found on the original walls. The first room of the museum contains some delightful fragments of wall painting from Old Nisa and another Parthian site near by Mansur Depe, as well as a large amphora.

The second room is to be furnished to give the visitor a sense of life in the Parthian era. The museum is, however, frequently locked. To the west side of the tower-like building lies the site of the latest excavations. To the northeast is the quadrate hall, with interior walls of roughly 20m, each wall containing six fired-brick columns. Where one of these columns is missing, an inverted semi-cylinder displays the horizontal marks once traced by ropes. Only one base survives of what were once four columns in the centre of the hall. It is an attractive survival – a sturdy-looking fired-brick column, its exterior presenting four semi-cylinders. All those fired-brick columns have led archaeologists to conclude that this was a tall structure, whose upper walls contained niches with large, brightly painted clay statues, fragments of which have been found. These depict both male and female figures. Archaeologists have proposed that the statues represented deified members of the Parthian dynastic leadership.

About 150m to the north of the quadrate hall is another assemblage of buildings. The structures remaining here are much less striking than those of the main complex, but it was from this northern complex that some of the most important artefacts found at Old Nisa were unearthed. The largest building here is the so-called large quadrate hall, square in plan with sides of 60m. Centred around a large courtyard, this building seems to have been a well-protected treasury. There was only one narrow entrance into the building, and the rectangular chambers around the yard seem to have been sealed with bricks as soon as they were filled. This did not stop the place falling later victim to robbers, but not everything was stolen. Archaeologists uncovered a collection of the beautiful ivory rhytons in 1948, carelessly thrown in a heap in one of the chambers. These drinking vessels have become one of the symbols of Turkmenistan, though some superstitiously recall that they were uncovered just before the 1948 earthquake devastated the area. To the east of the treasury building, a wine store was identified, containing the large clay vessels which would have held the wine. This building proved particularly valuable to archaeologists because each of the vessels was accompanied by little clay shards, ostraca, on which mundane information was written about the origin and date of purchase of the wine. This information has allowed researchers to learn much about the economy and human geography of the region in Parthian times, and also to establish the Parthian name of the fortress itself.