Gokdepe – Turkmen fortress in 45kms to the northwest of Ashgabat, built in 1879 by the population of Ahal-Tekke Oasis before the attack of the Russian Army. 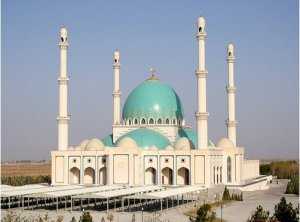 Its walls present a ground embankment surrounded by the moat and edged by the layer of clay. Its height consisted 4m, its thickness was up to 10m in the basis and was about 5m in the upper side. Its whole perimeters consisted 4,4kms. The territory of the fortress 40kms was absolutely plain, only one hill towered in the north-western corner, and there were a surrounded yard and wells somewhat southerner. After the unsuccessful assault and retreat of the Russian detachments nobody lived here but in 1880 the half of the whole population of the oasis (45 thousand people) gathered there and the whole square was thickly put up by the yurtas. The fortress of Geok Depe became a serious obstacle for the European army of the end of the 19th century prevailing in its level and equipment and fell down in the result of the long and hard siege. 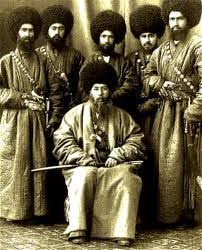 The siege of Geok-Depe: The Tekke Turkmen tribes based around the Ahal Oasis refused to come to any accommodation with the Russians, who by the late 1860s had established themselves on the eastern shore of the Caspian. In particular, the Turkmens’ slaving forays were becoming an increasing annoyance to the forces and interests of the tsar. Accordingly, in 1879 the local Russian commander, General Lomakin, was sent to take the key Turkmen camp at Geok Depe, in the centre of the oasis. The Turkmens routed the general’s forces, severely denting Russian pride. The disgraced Lomakin was replaced as Commander-in-Chief of the Transcaspian Military District by General Mikhail Skobelev, a brilliant, brave and ruthless officer, whose moods swung violently between euphoria and depression. Skobelev had risen to prominence in Russia’s Turkey campaign: he wore a white uniform into battle, replete with his medals, and rode on a white charger. He unsurprisingly acquired the nickname ‘White General’. Skobelev had once authored a plan for the invasion of India, and his appointment worried the British, concerned at possible Russian designs on their empire. Skobelev was determined to avenge the defeat of 1879. With 7,000 troops and 60 artillery pieces, he reached Geok Depe at the end of 1880. 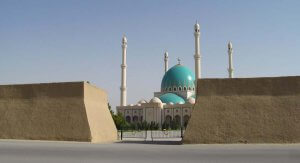 Learning a lesson from Lomakin’s experience, he decided to besiege the Turkmen fortifications, rather than make an immediate assault. But time was not on the Russians’ side. They were far from their sources of supply, and fearful that the Tekke would be reinforced by their compatriots from Mary. Skobelev’s artillery was having an effect inside the fortress, but was making little impression on the walls. Skobelev therefore determined to tunnel beneath the wall, and mine it. The mine, at the southeastern side of the fortress, was exploded on the morning of January 12, creating a 50m gap in the walls. Russian troops stormed the fortress, and by the early afternoon the Russian double-headed eagle was flying atop the hill of Dengil Depe in the heart of the Turkmen encampment. The Russians pursued the fleeing Turkmens with a brutality that would shock European public opinion. It is believed that around 6,500 Turkmens were buried in the fortress itself, and another 8,000 killed outside it, including many women and children. Skobelev admitted to the loss of only 268 Russian troops. Skobelev was not to profit from his victory. The Russian authorities were concerned that Skobelev’s military success and popularity were fuelling dangerous political ambition, and sent him off to a backwater job in Minsk. He was found dead, at the age of 38, in a bedroom of the Hotel Duseaux in Moscow, in somewhat compromising circumstances.

After the fall of Geok Depe, the Ahal Tekkes were never again a source of trouble to the Russians. It is said that Turkmens present at the opening ceremony of the Transcaspian Railway fell to their knees when the military band started playing, having associated the sound of military music with the terrible carnage of January 12 1881.