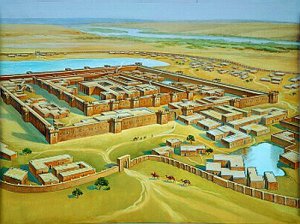 Altyn Depe (‘Golden Hill’) is a settlement of the Eneolithic and Bronze Ages. Extensive archaeological research was carried out here during the Soviet period.

The settlement contains many features suggestive of an emergent town, including a specialised potters’ quarter, across which much pottery and remnants of kilns were found, the evidence of separation of living quarters into districts differentiated by the wealth and status of their inhabitants, and indications of external trade networks. The discovery here of ivory objects such as gaming counters has led some researchers to identify links between Altyn Depe and the Harappan civilisation of the Indus Valley.

A major discovery here was that of a monumental cult complex, centred around a stepped ziggurat structure, topped with a

small shrine. Among the items found here were two to justify the name of the hill: a small gold head of a wolf, and a larger golden head of a bull, more than 7cm in height, with a turquoise crescent inlaid on its forehead. The Russian archaeologist V. M. Masson has suggested that the cult complex may have been dedicated to the Moon God, which in the mythology of Mesopotamia is often linked to the figure of a bull.

Altyn Depe was abandoned by the middle of the second millennium BC, possibly as a result of over-exploitation of the land, its inhabitants moving eastwards to the Merv Oasis. The site today is not easy to interpret. There have been no excavations here for several years, and the results of earlier digs have softened into depressions and mounds across the pottery-strewn hill.