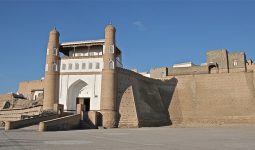 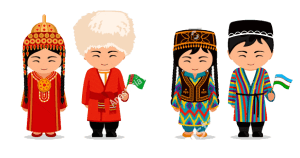 Arrive in Tashkent welcome at the airport and transfer to the hotel. Early check-in. Sightseeing tour of Tashkent: Khast Imam Complex – a religious center of the city consisting of the Barakkhan Madrasah, Kaffal Shashi Mausoleum and the library of Islamic Literature with the Holy Koran Book of the VII century. Visiting modern part of Tashkent by metro: Amir Timur Square, Applied Art Museum, Earthquake Memorial, Independence Square. Overnight in Tashkent.

Picnic style breakfast. Drive to Ashgabat (3 h). En-route we cross Karakum desert, will make a stop in small desert village Erbent. Arrival in Ashgabat. Drive to visit Nissa fortress -the Sanctuary of Parthian Kings. UNESCO declared fortress a World Heritage Site in 2007. Nissa described as one of the first capitals of the Parthians. It was founded by Arsaces I (reigned c. 250 BC – 211BC), and reputedly the royal necropolis of the Parthian Kings, although it has neither been established that the fortress at Nissa was a royal residence or a mausoleum. Drive to visit Turkmenbashy Ruhy Mosque in Kipchak (the largest mosque in Central Asia). Afternoon you will have Ashgabat city tour. You will see Presidential Palace, Ruhyyet Palace, Wedding Palace, modern “Yildyz” Hotel, Ferries Wheel, Constitution Monument, Arch of Neutrality, Monument and park of Independence, Ertogrul Gazy Mosque, Ashgabat 2017 Sports and Housing facilities. Overnight in Ashgabat.

Breakfast at the hotel. Transfer to Turkmen – Uzbek border Farap (3 h). Uzbek driver will meet you at Uzbek side. Drive to Bukhara, transfer to the hotel. Overnight in Bukhara.

Breakfast at the hotel. Drive to Shakhrisabz – hometown of Tamerlane. In Shakhrisabz we will visit the magnificent Palace of Timur – Ak Saray. The palace is covered with beautiful blue, white and gold mosaics. Continue by visit of Kok-Gumbaz Mosque and Dorus-Saodat Mausoleum. Drive to Samarkand. Overnight in Samarkand.

Breakfast at the hotel. Today we will visit Museum located in ancient settlement of Afrosiab. Then visit to Tombstone of Khodja Daniyar (St Daniel), revered by three world religions: Christianity, Judaism and Islam, and mausoleum is still a pilgrimage place for the followers of all three Abrahamic religions. Drive to Konigil village to visit Samarkand Paper Mill “Meros”, where you can see the process of making famous Samarkand paper by ancient technology. Transfer to the railway station for train Samarkand-Tashkent at 17:00. Arrive Tashkent at 19:10. Overnight in Tashkent.

Breakfast at the hotel. Check out by 12:00. Transfer to the airport. End of the tour.