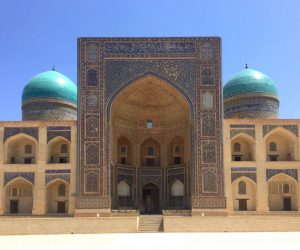 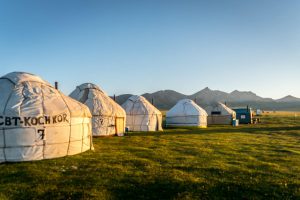 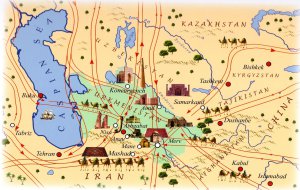 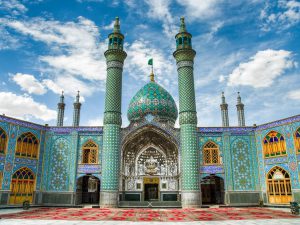 Central Asia is a region of Asia from the Caspian Sea in the west to central China in the east, and from southern Russia in the north to northern India in the south. It is also sometimes known as Middle Asia or Inner Asia, and is within the scope of the wider Eurasian continent.

Various definitions of its exact composition exist and no one definition is universally accepted. Despite this uncertainty in defining borders, it does have some important overall characteristics. For one, Central Asia has historically been closely tied to its nomadic peoples and the Silk Road. As a result, it has acted as a crossroads for the movement of people, goods, and ideas between Europe, West Asia, South Asia, and East Asia.

In modern context, Central Asia consists of the five former Soviet republics of Kazakhstan on the north, Kyrgyzstan on the northeast, Tajikistan - is situated to the southeast, Turkmenistan, which spreads from the Caspian Sea to the middle reaches of the one of the largest central Asian rivers, the Amu-Darya (Vahsh in ancient times, Oxus in Greek, and Jeihun in the Middle Ages); and Uzbekistan, located in the lower region of the Amu-Darya River. Uzbekistan covers the central area between the two rivers (called Maverannahr in the Middle Ages) i.e. the lands between the two biggest central Asian rivers, the Syr-Darya and Amu-Darya.

During pre-Islamic and early Islamic times, Central Asia was a predominantely Iranian region that included sedentary Sogdians, Chorasmians and semi-nomadic Scythians, Alans. The ancient sedentary population played an important role in the history of Central Asia. Tajiks, Pashtuns, Pamiris and other Iranian groups are still present in the region. After expansion by Turkic peoples, central Asia became also the homeland for many Turkic peoples, including the Uzbeks, Kazakhs, Kyrgyz, and Uyghurs, and Central Asia is sometimes referred to as Turkestan.

The desert areas and steppes of Central Asia are characterized by their continental climate and intensive isolation, extreme aridity, and sparse precipitation. Their remoteness from oceans, the major humidity source, little atmospheric precipitation, and high summer temperatures which created prolonged droughts, caused the formation of the vast desert regions here.

Begin your journey through Central Asia! You will see splendid architecture, feel at one with stunning wilderness, feel the hot wind of deserts and admire dazzling mountain summits.

Look into the past and you will see the present reflected. Have a happy trip along Central Asia travel along The Great Silk Road with Ahalsiyakhat.

At the moment, the interest of the world is being drawn to the great trans-continental routes of the ancient world. The Great Silk Road is a rich tapestry of tourism destinations and products based on the unique and outstandingly rich heritage, nature, and traditions of the dozens of distinct histories, peoples and cultures all along the timeless route, now extending a warm welcome to visitors.

In 1993 the UNWTO initiated a long-term project to organize and promote the Silk Road as a tourism concept. In 1994, representatives from 19 participating nations came together and adopted the historic Samarkand Declaration on Silk Road Tourism and approved a special logo to be used by all the governments, organizations and private sector entities involved.

Since then, forums and meetings have been held, and in 2002 the participants adopted the Bukhara Declaration on Silk Road Tourism which stressed the benefits of sustainable tourism and outlined specific steps to stimulate cultural and ecological tourism to Silk Road destinations. A Silk Road Tourism Office, hosted by the Uzbek government and with support of UNWTO was opened in Samarkand in 2004.

The World Tourism Organization published a Silk Road Tourism brochure in 1997, which was highly appreciated by the countries participating in the UNWTO Silk Road Project. This new brochure presents a mosaic of tourism products, sites and attractions in the Silk Road region as a whole, with the objective of contributing to a better knowledge of its tourism potential.

What's more, the famous traditions of Uzbek hospitality, which are so deeply rooted within its people, specific local custom and tasteful national cuisine, make Uzbekistan a very attractive tourism destination for travelers from all over the world.

Kazakhstan, Uzbekistan, Turkmenistan, Kyrgyzstan and Tajikistan together form the macro destination of Central Asia. Some tour operators also consider Azerbaijan, Mongolia, Xinjiang, Afghanistan and Tibet to be part of Central Asia. Close to eight million international border crossings were registered in this area in 2004.

Kazakhstan
With a population of 16.2 million, Kazakhstan has benefited from the good situation of its tourism industry. Setting Turkey's development strategy as its model, the country has been successful in improving its infrastructure.
Larger than all Western Europe, Kazakhstan is a vast country of steppes and mountains rich in natural beauty.

Kyrgyzstan
Compared to its neighbors in the region, Kyrgyzstan is not very large. Kyrgyzstan's landscape of high, forested mountains and lush, grassy steppes have attracted Silk Road travelers thankful for the region's cool climate.

Tajikistan
Like Turkmenistan, Tajikistan was once part of Persian territory in old times. During recent years, Tajikistan has attempted to develop its tourism industry through organizing cultural and literary festivals. Considering its cultural and historical situation, the country possesses astounding resources for attracting travelers.
Rugged and mountainous, Tajikistan sits at the heart of Central Asia, with China to the east and the Indian subcontinent to the south.

Turkmenistan
The history of Turkmenistan can be traced back to the 4th century BC. After numerous ups and downs, the country is now home to several cultures. Turkmenistan, located on the Silk Road, occupies a strategic spot in the region. It is among those countries which have common borders and good relations with Iran.
Elaborately woven, bright crimson carpets created by the delicate hands of nomadic tribal women have become the artistic symbol of Turkmenistan.

Uzbekistan
According to statistics, in the year 2010, the country had a population of 28 million, and although its tourism industry has not flourished, it is currently improving its infrastructure to develop the industry.
The fabled mosques and madrahssas of Samarkand, Bukhara and Khiva, with their marvelous design and colorful tile work, are just some of the sites in Uzbekistan linked to the Silk Road.